A part that escapes. Interview with Raku Kichizaemon, fifteenth grand master of the Raku line 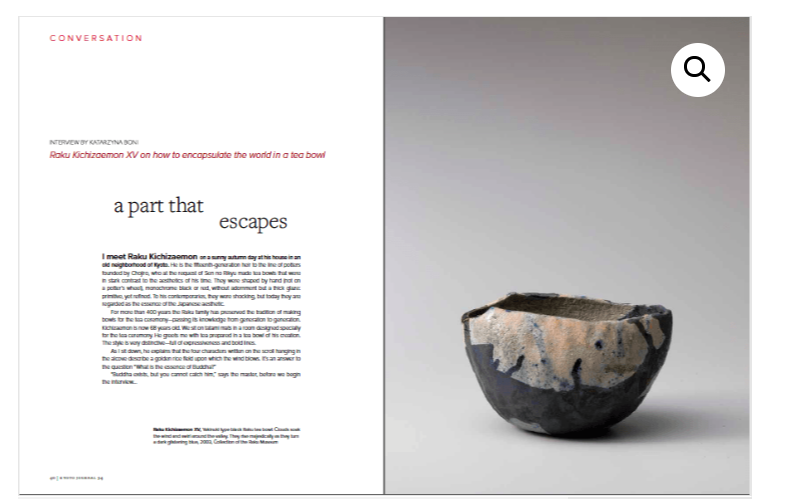 “I meet Raku Kichizaemon on a sunny autumn day at his house in an old neighborhood of Kyoto. He is the fifteenth-generation heir to the line of potters founded by Chojiro, who at the request of Sen no Rikyu made tea bowls that were in stark contrast to the aesthetics of his time. They were shaped by hand (not on a potter’s wheel), monochrome black or red, without adornment but a thick glaze: primitive, yet refined. To his contemporaries, they were shocking, but today they are regarded as the essence of the Japanese aesthetic. Chojiro’s tea bowls fetch between 500 million and one billion yen, yet there are hardly any available for sale. For more than 400 years the Raku family has preserved the tradition of making bowls for the tea ceremony—passing its knowledge from generation to generation. Kichizaemon is now 68 years old. We sit on tatami mats in a room designed specially for the tea ceremony. He greets me with tea prepared in a tea bowl of his creation. The style is very distinctive—full of expressiveness and bold lines. As I sit down, he explains that the four characters written on the scroll hanging in the alcove describe a golden rice field upon which the wind blows. It’s an answer to the question “What is the essence of Buddha?” “Buddha exists, but you cannot catch him,”says the master, before we begin
the interview…”

The interview with Raku Kichizaemon XV on how to put the world in a tea bowl was published in Kyoto Journal. You can by an archive issue here.

This interview is a part of a series of  (unpublished) interviews that I made with several Japanese masters. Main focus in those interviews was put on the contradiction between preserving the tradition while modernizing it. It also touched upon Japanese way of understanding of art, crafts, and mastery.